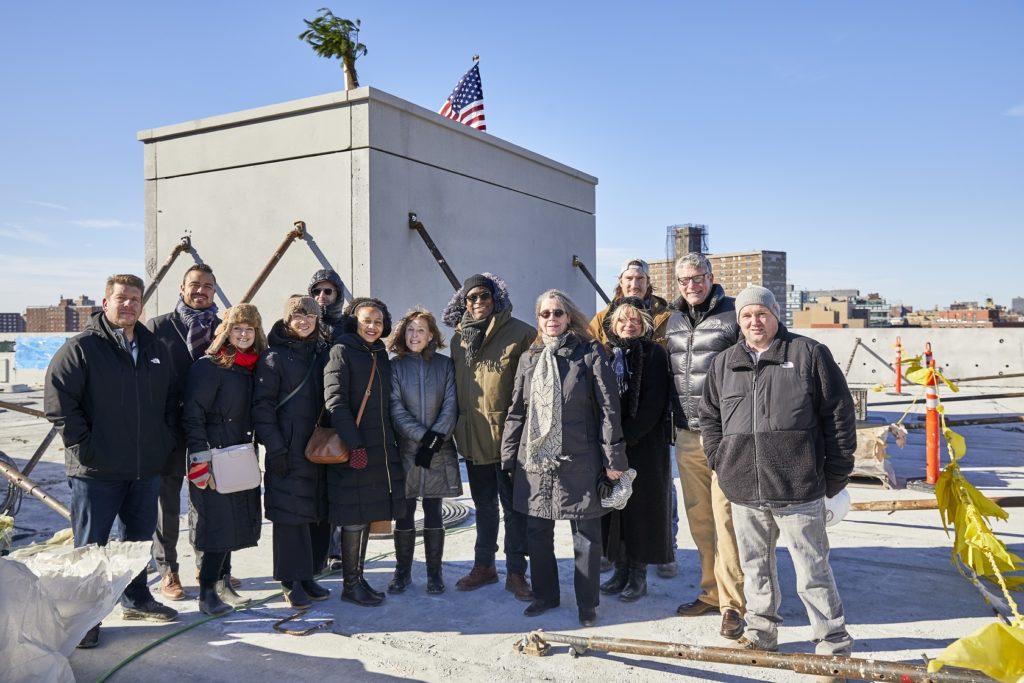 On Friday, January 11, 2019, WHEDco and BFC Partners celebrated the topping out of construction of Bronx Commons, a mixed-used development in Melrose that will provide hundreds of units of affordable housing and a world-class music performance venue to the Bronx. The developers also released new renderings that highlight the project’s emphasis on environmental sustainability by showing off its 428-panel rooftop Solar PV installation, which will be among the largest such installations on an affordable housing development in New York City.

“We are proud to work with WHEDco to deliver much-needed affordable housing and state-of-the-art Bronx Music Hall for performers to continue the rich tradition of cultural activity in the Bronx,” said Donald Capoccia, principal and founder of BFC Partners. “Bronx Commons is one of the most environmentally-friendly projects in the five boroughs, and we’re especially pleased to help raise the bar for sustainability in affordable housing development.”

“We are thrilled to join BFC Partners in celebrating this milestone in the construction of Bronx Commons, which will be a game-changer for Melrose and the South Bronx,” said Davon Russell, President of WHEDco. “Bronx Commons will provide sorely-needed affordable housing to low-income families and individuals at risk of homelessness and displacement, helping them stay in their community and thrive. With the Bronx Music Hall at its core, it will also spur local economic growth, as a vital hub of culture and commerce.”

Bronx Commons, which completes the Melrose Commons Urban Renewal Area, is a 12-story, 100 percent affordable building located on the west side of Elton Avenue between East 162nd and East 163rd Street in Melrose. Its 305 units of affordable housing—ranging from studio apartments to three-bedrooms—will serve formerly homeless families and individuals, including victims and survivors of domestic violence, in addition to low-income households earning between 30-110 percent of the Area Media Income (AMI).

“The Bronx Music Hall celebrates the cultural contributions of generations of immigrants to the Bronx. Their melodies and rhythms have enlivened our city for decades,” said Nancy Biberman, Founder of WHEDco. “This topping out lays the final beam in the structure that will showcase New York’s proud harmonies.”

In addition to the housing component, Bronx Commons will feature the 14,000 square foot Bronx Music Hall, which will be the permanent home of WHEDco’s Bronx Music Heritage Center (BMHC), the only cultural institution in New York City committed to restoring the rich musical heritage of the Bronx – a place where jazz, rhythm and blues, and hip-hop were created and fused with Afro-Caribbean beats. The Bronx Music Hall will feature a concert hall with 250 seats, rehearsal spaces and an outdoor performance and recreational space, among other amenities. The space will be utilized by local artists who will continue the Bronx’s deep-rooted history of producing cutting-edge music and arts.

“As housing affordability and displacement concerns grow across the City and our borough, my office has remained steadfast in our commitment to ensuring that Bronx residents are able to stay in place and continue to raise their families here,” said Bronx Borough President Ruben Diaz Jr. “We are proud to have provided capital funding for the development of Bronx Commons and the Bronx Music Hall, which will not only add much-needed affordable units to our housing stock, but also provide opportunities for residents and visitors alike to celebrate the rich cultural legacy of our great borough.”

“Our City is facing an affordable housing crisis, making the creation of new affordable apartments incredibly important citywide,” said Council Member Rafael Salamanca Jr. “I’m excited to celebrate the topping out of Bronx Commons today, a 100 percent affordable development that will house the formerly homeless, survivors of domestic abuse, low-income earners and working families in a brand new 12-story building. I applaud WHEDco and BFC Partners on this milestone.”

Bronx Commons, which will also include 22,000 feet of commercial space, is expected to be completed by the end of 2019.