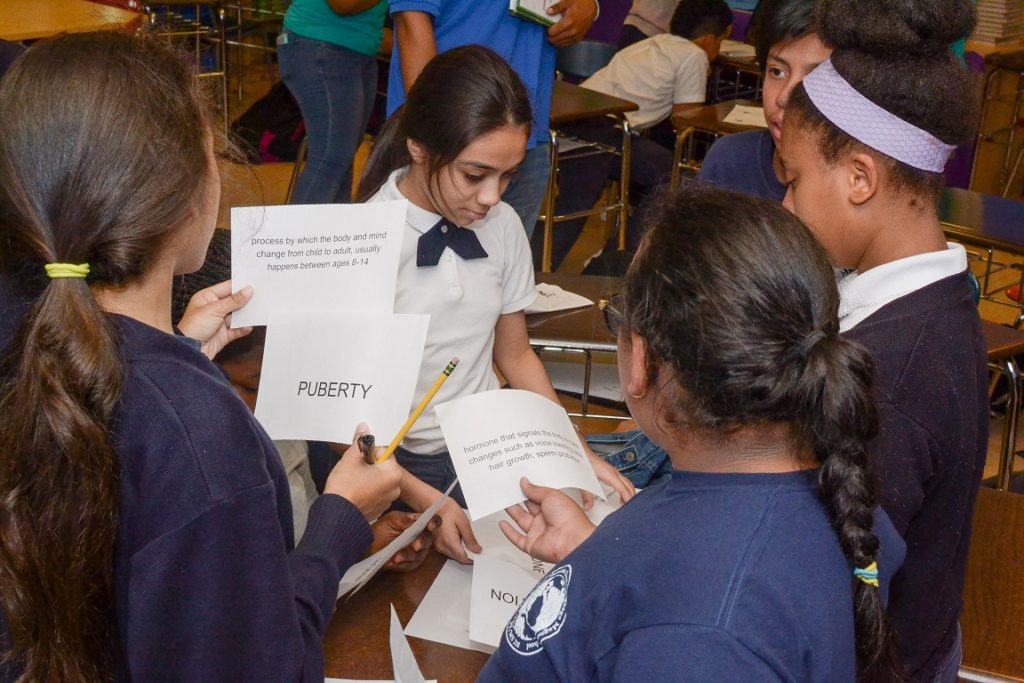 Sixth grade students at PS/MS 218 scramble to get into groups of seven before beginning an exercise about sexual health. The exercise requires the middle-schoolers to navigate sex-ed terms like “puberty,” “hormones,” and “menstruation,” and match them with their correct definitions. The first group to complete the task receives candy and bragging rights.

“I like this program because you learn about sexual education, how to protect yourself in the future and what’s happening in your body right now,” said Carissa Delgado, a 12-year-old student who participates in WHEDco’s After School Enrichment Program at PS/MS 218. 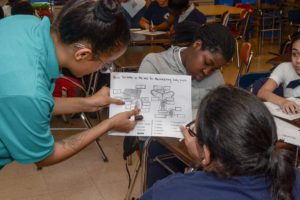 JAM, or Just Ask Me, is a peer-led program for students from sixth through eighth grade, which seeks to provide awareness and knowledge to rising teens about sexual health and relationships, and to empower and further the knowledge of the high school students who serve as peer educators.

“There’s so much that they don’t know about their own bodies, and there’s a lot of misinformation out there that we address with facts and open communication,” said Crismely Zavala, a former JAM participant and peer educator, who currently works as a program assistant.

At the beginning of the school year, the high school students who will serve as peer educators are trained by the JAM Sexual Education Program Coordinator. In the spring, peer educators and the Sexual Education Program Coordinator lead JAM lessons with the students. Topics include healthy relationships and consent, anatomy, LGBT, pregnancy, and sexually-transmitted infections (STI’s) and protection.

“There’s a misconception that middle schoolers are not ready for sex-ed, but that’s not true,” says Haylin Belay, Sexual Education Program Coordinator for JAM. “We did not have a single class where students were not engaged,” she added, noting that the JAM curriculum is age-appropriate and adjusted for each grade level. As the grade level increases, so does the student’s comfort level.

A recent focus group with JAM peer educators revealed that they strongly believe that being close in age to the participants allows them to better relate, while being seen as a model or mentor. In addition to educating the students in JAM, the peer educators feel they are also creating awareness across the broader community on these issues. They also spoke of their increased levels of maturity, and the patience they’ve developed when trying to educate people who express disrespectful ideas or state factually incorrect information.

Meanwhile, an assessment analysis conducted by WHEDco’s Research, Policy, and Evaluation team examined the learning growth for students who participated in JAM during the 2015-2016 school year. As part of the study, program participants were given pre- and post-assessments in order to measure learning growth. The analysis of pre- and post-assessment data shows that 6th graders increased their knowledge by almost 90 percent, while 7th graders experienced a 60% increase.

The study also revealed that, upon completing the program, JAM students showed a tremendous grasp of the concept of consent, and had learned about effective, respectful communication practices. The students also expressed knowledge of the appropriate responses to give if someone makes homophobic or transphobic remarks. On the subject of STI’s and protection, the students demonstrated an increase in knowledge about appropriate forms of contraception and protection from sexually transmitted infections. The eighth grade students, most of whom had participated in JAM for three years, expressed that the protection and consent topics had the most impact on them, and that between the first and last year of JAM, they became a lot more comfortable and knowledgeable with sex education.

Created in 2009, JAM is the brainchild of a group of teen girls enrolled in WHEDco’s Project STEP (Students Toward Educational Progress), who were concerned with the lack of sex-ed curriculum in New York City public schools, as well as the teenage pregnancy rate and daunting health statistics in the Bronx, which has consistently received the lowest ranking out of all New York State counties in “positive health outcomes.”

This year for the first time, JAM was expanded to serve a small group of 5th graders in WHEDco’s After School Enrichment Program at PS/MS 218, in what is playfully being referred to as “JAM Jr.”