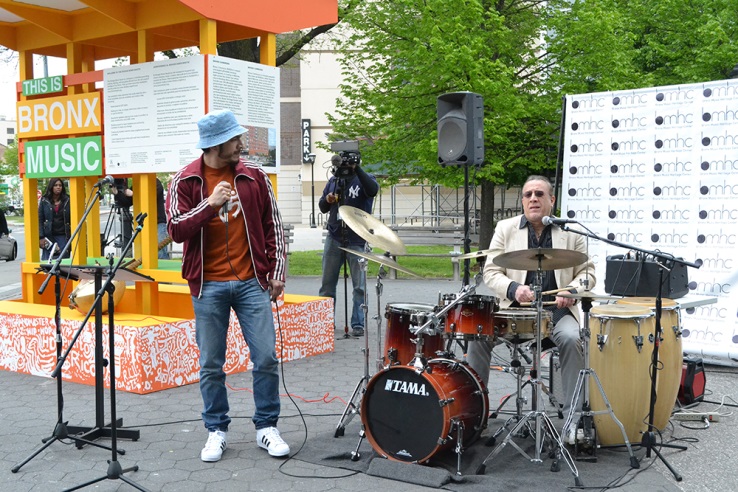 On Tuesday, May 17, WHEDco partnered with NYC Parks and ArtPlace America to launch the new Boogie Down Booth in Melrose, the third iteration of the music installation that took Southern Boulevard by storm. The new Booth, which plays Bronx music around the clock, will be on 161st Street and Elton Avenue, in front of Boricua College and across the street from the future Bronx Commons site, for one year.

“The music from the booth caught my ear as I passed by; you just don’t see things like this,” said Jose Perez, a longtime resident of the Melrose neighborhood where the Booth is installed.

The Boogie Down Booth is powered by solar panels and plays an assortment of Bronx tunes, including hip-hop, Latin jazz, salsa, and Gambian music, to combat noise pollution from traffic. The Booth also offers a colorful and interactive place to sit and relax, displays community updates, and provides lighting at night to address safety concerns. The vibrant music installation demonstrates the impact renewable energy can have in urban environments, while representing the musical legacy of the Bronx.

“The Boogie Down Booth brought me back to when I grew up right in this neighborhood listening to this type of music,” said Freddy Rivera. “I was raised with salsa, and I’m glad to see it alive and well!”

“No other place has produced more music than the Bronx besides New Orleans, and the Boogie Down Booth is ubiquitous with that musical diversity,” said multi-Grammy nominated percussionist, Bobby Sanabria, who is featured on the new playlist and performed at the launch event. Other artists who performed at the event and are on the playlist include Salieu Suso (Gambian music), Robert Sanabria (hip-hop), and Nancy Mercado (poetry reading).

“This project helps introduce new generations to the Bronx’s musical legacy of music and poetry,” said Nancy Mercado, who is also a professor at the neighboring Boricua College.

Community members and media groups were introduced to the Booth in front of the future Bronx Commons site, which will be the permanent home of the Bronx Music Heritage Center (BMHC), a community performance venue that celebrates Bronx music. Bronx Commons will also include affordable apartments for elder artists, further exemplifying WHEDco’s commitment to Bronx music.