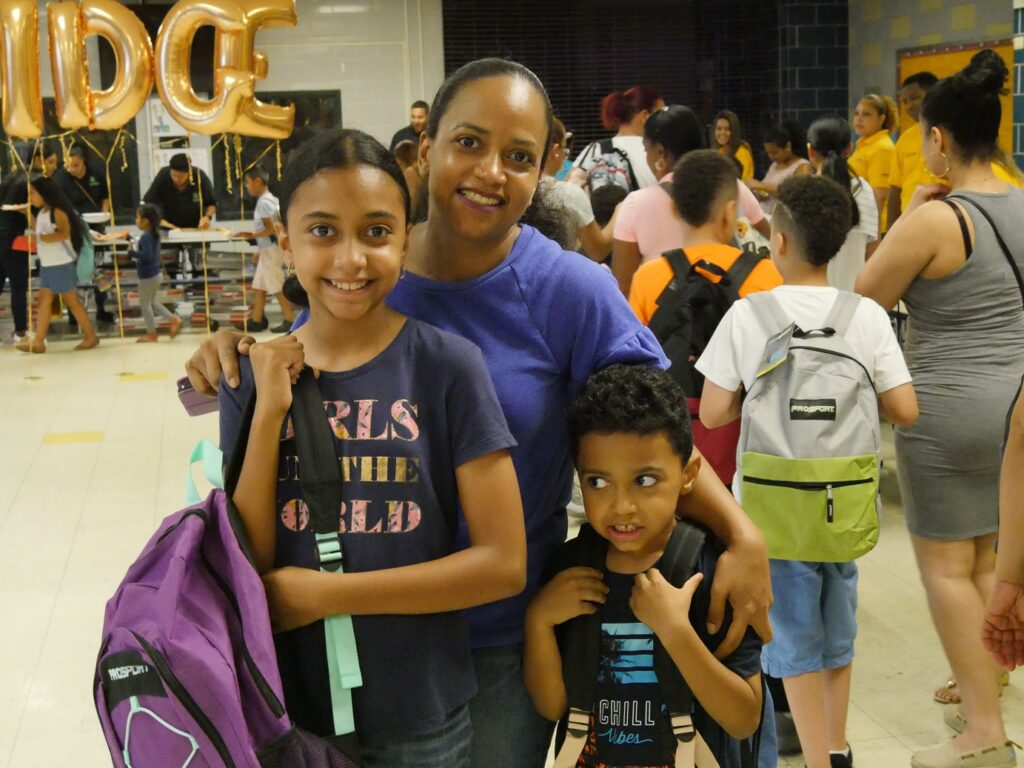 Standing under the blazing sun, hundreds of people formed lines that looped around the street, into the parking area, and into the yard at the Rafael Hernandez Dual Language Magnet School (PS/MS 218) in the South Bronx.

But for nearly 600 parents and children, the wait was worth it.

On August 21, 2019, WHEDco, in partnership with the Garden of Dreams Foundation, hosted a Back-to-School Drive at its partner school PS/MS 218, where they delivered almost 600 backpacks filled with school supplies to children from the community. For many parents like Latoya B., the drive helps alleviate what can be a huge financial burden in preparing their kids for school.

“There’s families that struggle, and if you get an opportunity to get something, that’s beautiful for the kids because it should always be about the kids,” Latoya said.

Kayla Familia, an 8th grade student in WHEDco’s afterschool program at PS/MS 218, said her parents received a phone call informing them of the event. Accompanied by two friends, Familia walked into the cafeteria, picked up her bag and a slice of pizza that was being offered to everyone in attendance, and said with a smile on her face that she couldn’t miss the opportunity “to get free school supplies.”

For Yesenia Lopez, a resident of Urban Horizons and a mother to a 12-year-old and a 14-year-old, WHEDco’s giveaway is the first she’s seen in the neighborhood.

“I like the fact that they’re giving back to the kids and the community,” Lopez said.

The school supplies distributed included notebooks, pencils, erasers, and folders among other materials.

For Latoya, WHEDco’s drive not only serves as financial help, but as a confidence-booster for her kids as well.

“You know how hard it is for your kids to feel a certain kind of way because they don’t have and all their friends have?” Latoya exclaimed. “That’s heartbreaking for children, so we’re thankful.”