The Board of the Women’s Housing and Economic Development Corporation (WHEDco) has announced that Nancy Biberman is stepping aside as the organization’s president, a position she has held since its founding in 1992. The Board also announced that based on his talent, demonstrated leadership and devotion to WHEDco’s mission, Davon Russell, WHEDco’s decade-long Executive Vice President, is to succeed Nancy as of September 18. The transition comes as WHEDco celebrates 25 years of transformative work in the South Bronx, most recently breaking ground on Bronx Commons and the Bronx Music Hall after seven years of planning.

In addition to being named President Emerita, Nancy will serve as Senior Advisor for Housing Development to WHEDco’s Bronx Commons development through its completion in 2019.

Nancy Biberman pioneered a process of community- and research-driven historic and contextual development, utilizing buildings and land for a mix of purposes in addition to housing: business incubators, retail, childcare, health care, education and performance venues. Her work has been guided by conversations with Bronx residents. WHEDco’s first programmatic initiatives in its Urban Horizons building -the commercial kitchen business incubator now known as Bronx CookSpace, and a training program for family day care providers now called the Home-Based Childcare Training Institute– were launched after early findings that many women were supporting themselves by preparing and selling food, and caring for children.

Because of the Bronx’s uniquely high asthma rates, Nancy determined that WHEDco’s next development, Intervale Green (completed in 2007) would be built to Energy Star standards and with non-toxic building materials. Nancy also completed a cellar-to-roof energy retrofit of Urban Horizons. With Bronx Commons and the Bronx Music Hall, Nancy has led WHEDco’s decade-long neighborhood collaboration to revive the borough’s history as a hub for music innovation.

“I believe in the Bronx – in the women who have been tireless advocates for themselves and their families, in the music that has enlivened street corners and moved people to dance for decades, and in the memories and energy of the ‘Boogie Down’ that have endured despite the city’s constant cycle of change. But nothing I have done at WHEDco gives me greater pride than passing the leadership baton to my long-time colleague and friend, Davon Russell, with the utmost confidence in his wisdom and inspirational leadership. Davon is a lifelong educator who has overseen, grown and deepened significant aspects of WHEDco’s work, while mentoring countless young people and serving as a role model for the entire WHEDco staff. Davon is a star,” said Nancy Biberman, Founder and outgoing President of WHEDco.

A lifelong educator and mentor who believes in the transformative power of the arts, Davon Russell creates and implements research-driven programs for toddlers through high schoolers at WHEDco. He began his career at WHEDco as a part-time after school teacher, and steadily rose through the organization over twenty years, serving as Executive Vice President since 2007. Under Davon’s supervision, all WHEDco’s youth programs -serving infants and toddlers through high schoolers and college applicants- have achieved stellar results, city-wide recognition, and steady growth in the number of children and youth served.

A master teacher, role model and leader, Davon has mentored countless students, many of whom have returned to WHEDco with their Master’s Degrees in hand to join the staff. As Executive Vice President, he has overseen WHEDco’s day-to-day operations and programming, and has spearheaded all staff meetings and retreats, building upon WHEDco’s solid structure and impeccable track record in community development.

“I have had the enormous pleasure of working with and learning from Nancy for nearly twenty years at WHEDco. Under Nancy’s leadership, we grew WHEDco into a force that not only houses hundreds of Bronx residents, but educates and enriches thousands more. Today, Nancy’s vision of building thriving communities in the Bronx is stronger than ever, and I am deeply proud and honored to continue her work and bring WHEDco into the future,” said Davon Russell, incoming President of WHEDco.

“WHEDco’s work has been transformative for the Bronx because Nancy has always started from the right place -by going to the people who live and work in the community to ask and to listen. While others are ‘thought’ leaders, Nancy is an ‘action’ leader, one who is on the ground in people’s homes and shops finding out what they want to preserve, what they need improved, and what they’ve lost that can be regained to enrich their lives. Nancy’s work at WHEDco has embodied the belief that we are all in this together, and together we will honor Nancy’s legacy by continuing to act on that belief,” said Linda Field, Board Chair of WHEDco and co-founder of Ashton Management LLC.

“Since he joined WHEDco 20 years ago, Davon has been instrumental in developing and nurturing WHEDco’s programs. He has grown our youth initiatives from serving a dozen students to its current size of over 1,000 students annually, and he was key to the formation of our charter school. We look forward to Davon’s leadership as we deepen our impact and reach to the communities we serve,” said Field.

“For three decades, Nancy has been at the forefront of community development in New York City. She recognized long before many others that building housing alone is not enough, but that new development must also anchor the kinds of cultural and education resources that are necessary for truly healthy, thriving communities,” said Carl Weisbrod, former Director of the New York City Department of City Planning and Chairman of the New York City Planning Commission.

Under Nancy Biberman’s leadership, WHEDco’s community development approach has been grounded in the preservation, memory and history of the South Bronx, expressed through its architecture, design, culture and open spaces.

Nancy’s work has received multiple national awards, and has been widely featured in the news, including the New York Times, New York Magazine, NPR, and Wall Street Journal. She speaks and writes on community development and creative placemaking, with published articles on green building, affordable housing design, women in development and post-9/11 rebuilding in New York.

Nancy is a lifelong social justice activist who began her career as a legal services lawyer on the Lower East Side, representing tenants, immigrants, and abused women. She founded and developed the West End Residence, and led the development of Catholic Charities’ Highbridge cluster of vacant buildings. Nancy holds degrees from Barnard College and Rutgers/Newark Law School, and several post-graduate fellowships. Nancy is a wife and mother of two sons and a daughter. She is a board member of the Hostos Community College Foundation, the Freelancers Union Insurance Company, and the South Bronx Early College Academy Charter School.

Born to a single mother in Jamaica, at ten years old Davon discovered that he ran faster than all the other boys, and was always first in whatever he set out to do. He was admitted to Jamaica’s prestigious Kingston College high school and soon became “head boy” of every class, a title bestowed on the student who was the first to arrive, last to leave, and universally relied on to get the job done. He became a competitive sprinter and Captain of the track team. Recruited by the University of Oregon on a full scholarship, Davon ran on the track team there, but also discovered a love of the theater as an outlet for personal expression and persuasion.

After receiving his BA in Humanities, Davon returned to Oregon for a MA in journalism and theater. For four years he was an actor at the Oregon Shakespeare Festival, a premier regional theater company. While working as an actor, Davon watched a fellow actor die from HIV, and came to understand the importance of support, guidance, mentoring and educating as a natural outgrowth of his acting.

Davon returned to New York City in 1997 and began looking for work in human services and education. That summer, he volunteered as a mental health counselor/drama teacher at Camp Excel, an intensive program for mentally ill and at-risk young people. While at Excel, Davon saw a notice for a job at WHEDco, and began his long career at the organization.

Frustrated with the limitations of after-school education, Davon spearheaded WHEDco’s participation in the South Bronx Early College Academy (SBECA), a public charter school serving grades 6-8 and set to expand to grades 9-12. As Chair of the School’s Board of Directors, Davon oversees the director and principal, and has grown the school’s diverse Board.

In addition to SBECA, Davon serves on the Board of Directors of the Grace Church School. Davon is a husband and father to two young girls. 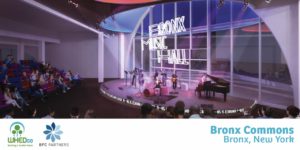 WHEDco’s Bronx Music Heritage Center (BMHC) is a performance and community space designed to showcase and amplify the Bronx’s rich musical legacy. Envisioned as a “lab” space, the BMHC encourages artists and community members to gather, participate in performances, and express their vision for this cultural facility. In less than five years, the BMHC has hosted more than 400 events for nearly 14,000 attendees.

Building off the success of the BMHC lab, WHEDco will open the Bronx Music Hall, a permanent music venue and cultural center, in the Melrose section of the Bronx. The Hall will be housed in Bronx Commons, a 426,000 square foot, mixed-used development that will include 305 all-affordable apartments and 25,000 sq ft of retail. WHEDco is co-developing Bronx Commons with builders BFC Partners.

When complete in 2019, the 14,000 square foot Bronx Music Hall will feature a flexible, 300-seat performance space and dance hall; a permanent, interactive exhibit that connects visitors to the history and influence of Bronx music; rehearsal and classroom spaces; gallery space for temporary or traveling exhibitions; and an outdoor plaza for recreation and open-air performances. The Hall will be a state-of-the art venue where Bronx residents and visitors from around the city and the world can explore Bronx music history and understand its lasting legacy and contributions to today’s popular music, and actively participate in music and art making. In May of 2017, the development was awarded the “Creating a Dynamic City Award” by The Richman Group. Danois Architects is the design architect for Bronx Commons. WXY Architecture + Urban Design is the architect for the Bronx Music Hall. Local Projects, an interactive-media design firm, is designing the exhibits and music experience for the Bronx Music Hall. For more information, visit www.thisisbronxmusic.org