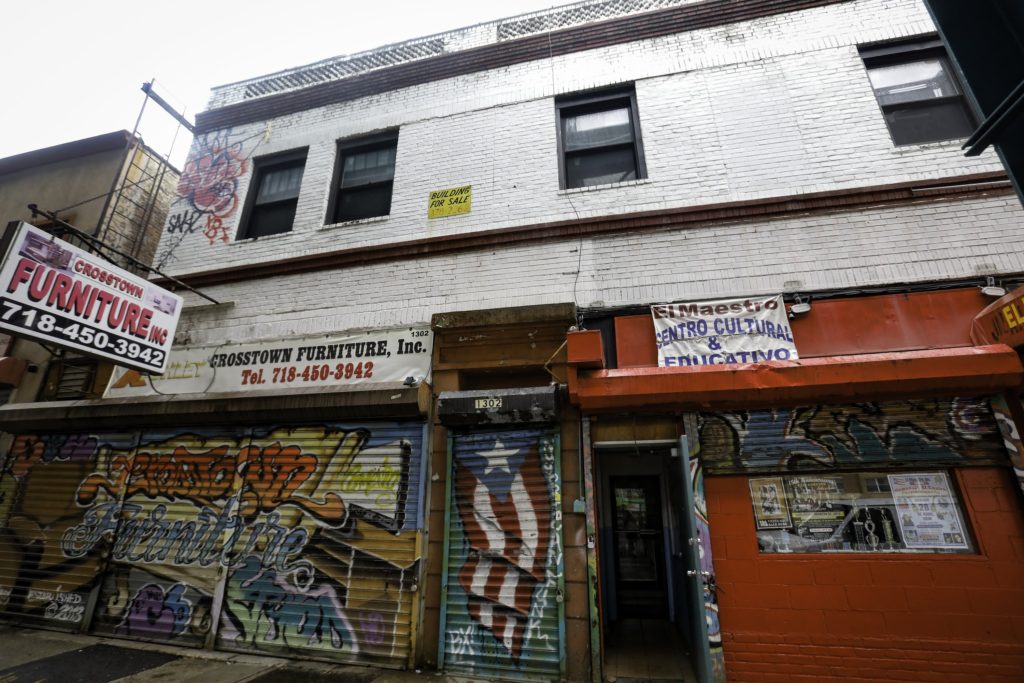 WHEDco, LISC NYC, Citi Community Development and the NYC SBS team up to carry out targeted improvements to increase economic vitality in Crotona East/Morrisania in the Bronx

Many urban neighborhoods that have experienced under-investment for generations are finally seeing signs of renewed interest from developers and city officials. While the investment is welcome in many ways, it also threatens to displace long-time businesses who often struggle to keep up with the changing landscape. The Commercial Corridor Challenge aims to improve the competitiveness of retail corridors in three such low-income New York City neighborhoods so that their local retailers benefit from new investments rather than risk being displaced by them.

That capacity building is one of the two essential goals of the Corridor Challenge. The first is to help businesses in each neighborhood undertake a series of modest, but strategic and highly visible, projects to make each retail corridor more inviting to neighborhood residents and visitors, drawing more patrons to spend their shopping dollars in the community. But the program also helps community-based organizations, who are coordinating this work on the ground in each neighborhood, to build their credibility with business owners and develop their capacity to do more corridor improvement work in the future. That ensures each community continues to improve the success of their local retail businesses even after the Corridor Challenge concludes.

LISC NYC described the program’s kickoff last year in this post. Below is the first of two stories focusing on WHEDco’s work on Southern Boulevard. This one describes conditions on the corridor before the projects are implemented. In the summer, there will be another story on the projects’ impacts. 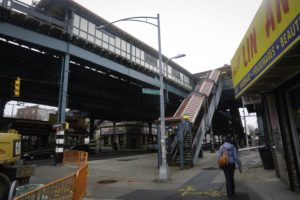 Southern Boulevard in Crotona East/Morrisania is a mile-long residential and retail corridor in the Bronx with an eclectic mix of new and established neighborhood-serving businesses catering to a diverse community. The strip consists mostly of 3- to 6-story apartment buildings straddling two busy elevated subway lines that run just above the boulevard. Like many Bronx neighborhoods, this working-class community began to experience significant disinvestment and depopulation in the 1960s. And while the past 10 years have finally brought improving economic conditions to many parts of the Bronx, including a spate of public and private development along Southern Boulevard, this corridor continues to struggle as a shopping street. “Thousands of new residents have moved into the area, but a lot of them aren’t connecting to the retail corridor,” say Kerry McLean, a vice president at WHEDco, the neighborhood’s primary community development organization. “It’s dark under the el. There are vacant stores. It’s not an intuitive place to walk down to go shopping for many people.”

Since 2006, WHEDco has worked tirelessly to rebuild this neighborhood through a combination of affordable housing development, education and youth programming, childcare and family support services, arts and cultural programming, and small business support—all coordinated so that the results improve the economic mobility of local residents.

“It’s more than just affordable housing,” says Yesmín Vega Valdivieso, senior program manager of community development at WHEDco, “To be a more responsive and active community for local families, the neighborhood has to serve as many of its needs as possible. Around each of our mixed-use buildings, we spend time talking to the community about their needs and desires. A huge part of that, we hear time and time again from residents and people who work here, is a healthy, vibrant retail corridor.”

That last part “differentiates WHEDco from a lot of other neighborhood groups,” says Eva Alligood, deputy director of LISC NYC, which is convening the Corridor Challenge partners. “WHEDco’s approach to community development isn’t just about building. It’s also about strengthening the environment, including engaging with residents and business owners about what’s going on in their neighborhood and asking them what they need to be successful. These retail businesses aren’t incidental to the neighborhood’s overall success—they’re a central part of it.”

An essential element of the Corridor Challenge is demonstrating how, when properly coordinated, relatively modest interventions can have outsized impacts. “That means focusing on improvements in the physical environment that are highly visible to both shoppers and merchants—things like cleanliness, safety, and streetscape improvements,” says long-time LISC collaborator and specialist in commercial corridors Larisa Ortiz whose firm, Larisa Ortiz Associates (LOA), is helping guide the effort. “It also means making improvements in strategic, concentrated locations so that they reinforce one another and create greater impact than if they were spread out along an entire corridor. With a limited budget, we make improvements highly visible by deploying them in a concentrated area where foot traffic is highest, and people are most likely to notice.” 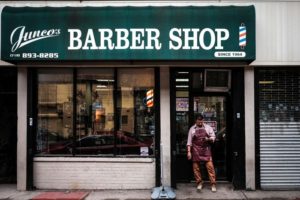 The Corridor Challenge has three stages, each of which builds upon the previous one:

1. Diagnosing the particular situation, including a neighborhood’s assets and challenges;

2. Choosing the right interventions—focusing, in particular, on quick wins from immediately implementable, geographically targeted, and highly visible actions; and

3. Measuring the impact of interventions to quantify benefits and inform future investment strategies.

The Corridor Challenge is a data-driven process. To assess challenges and opportunities on Southern Boulevard, WHEDco gathered perspectives from both residents and merchants through a Consumer Preference Survey they had conducted along the corridor, as well as conversations with local stakeholders. The results identified several challenges.

Respondents mentioned the insufficient lighting under the elevated subway tracks, and that the significant number of shuttered storefronts and vacant lots created a sense of discontinuity along the strip. The storefronts that were occupied were described as being in poor condition. And while the neighborhood has been receiving a much-needed upgrade for its local water and sewer mains over the past couple of years, survey respondents indicated that the long-term construction reduced foot traffic and impacted visibility of, and accessibility to, businesses from the sidewalks. (Long-term construction along commercial corridors presents challenges for retail businesses in many communities. LISC NYC wants to develop coping strategies for shop owners that can help other communities, too.) 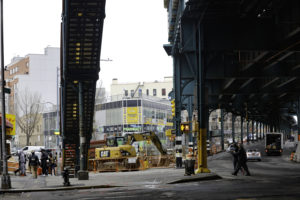 With findings from the Consumer Preference Survey in hand, attention turned to what to do to address challenges. LISC NYC deployed another component of the Corridor Challenge program: bringing in expert consultants—such as planners, architects, and community development professionals—to help WHEDco assess the physical and market conditions along Southern Boulevard and help determine the particular strategic interventions that were most appropriate to spur revitalization. These experts helped WHEDco identify highly visible early-action projects that fall into three categories, each responding to main findings from the Consumer Preference Survey, and from a subsequent Commercial District Needs Assessment of Southern Boulevard that WHEDco undertook:

WHEDco worked with LISC NYC and expert consultants to identify the right placement for the interventions. “We’ve been looking at what can be done at Freeman Street for a while now,” says WHEDco’s McLean of the intersection beneath a busy subway stop at a point near the middle of the corridor. “There’s more private development happening there, including some new retail businesses and a new school, and we want to make sure we nurture existing as well as new businesses through this challenging period with all of the street construction. We think the best way to do that is to make sure our early-action projects will really have visual impact and improve right around the station.” 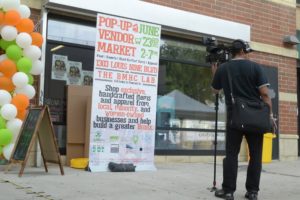 The goal of these interventions is to help this retail corridor to increase the level of commerce and to allow long-standing businesses on the corridor to continue serving the local community and economy. The Corridor Challenge is tracking changes in foot traffic, as well as how shoppers’ impressions of Southern Boulevard shift from before the interventions are deployed, to after.

To measure pedestrian traffic, LISC NYC is working with the firm Motionloft, which has temporarily installed electronic sensors on each corridor that tabulate passersby. Counts are hourly, in near-real-time, and are cross-referenced with weather conditions and seasons. Sensors were installed in January, 2018, to count pedestrians before WHEDco’s storefront improvement and wayfinding projects are to be deployed to develop a baseline; sensors will remain up for five months to also capture data after the projects are fully implemented. 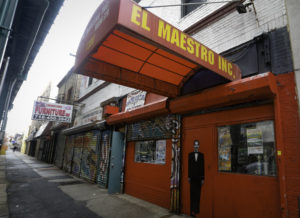 “The pedestrian counts are essential to help us understand the impact of the projects, but the data is also helpful in other ways,” says Erika Van Gundy, a community development officer at LISC NYC who is helping to administer the Corridor Challenge Project. “The pedestrian data can be used by merchants in each corridor to help inform decisions around their opening hours. Or local brokers might use it to communicate the strength of the market to potential businesses looking to locate in the area, which would help address vacancy levels.”

To understand how people’s perceptions about the corridor change after the early-action projects are implemented, a so-called intercept survey was administered in the fall of 2017 to 110 passersby on Southern Boulevard (in English and in Spanish) to ask about their shopping habits and perceptions of neighborhood in terms of personal safety, shopping quality, and attractiveness of streetscape and storefronts. Additional questions were asked in the Bronx about the perceived impact of the long-term construction along the boulevard. The survey will be repeated in the summer after the storefront and wayfinding projects have been completed to see how perceptions change. Finally, WHEDco will work with local business owners to understand changes in customer volumes and sales, as well as ways in which the program has helped them to be better connected with community partners and other businesses. 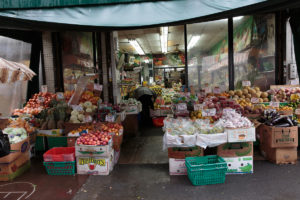 Storefront improvement grants have been approved for three businesses at the Freeman Street intersection. WHEDco is working with them now to obtain quotes from contractors for painting, updated signage, and new lighting in just a few more weeks. “We did extensive outreach to business owners along the corridor and then we started working with the business owners who expressed an interest in participating. As it turns out, we already had good long-standing relationships with each of them,” says WHEDco’s Vega Valdivieso. “In communities that have experienced disinvestment for so long, we find there can initially be a lack of trust or comfort participating in new initiatives like this. But after people see it happen, we expect other business owners will apply for grants, too.”

The wayfinding project is also about to be implemented. Final approvals from city agencies are being obtained for signs clearly communicating that stores along the strip are open for business and encouraging pedestrians to explore the various shops, restaurants, and other offerings on the corridor to be hung on the ubiquitous construction barricades and tree guards that line the boulevard and its sidewalks.

This summer, after implementation, we will share an update describing impacts and lessons learned.