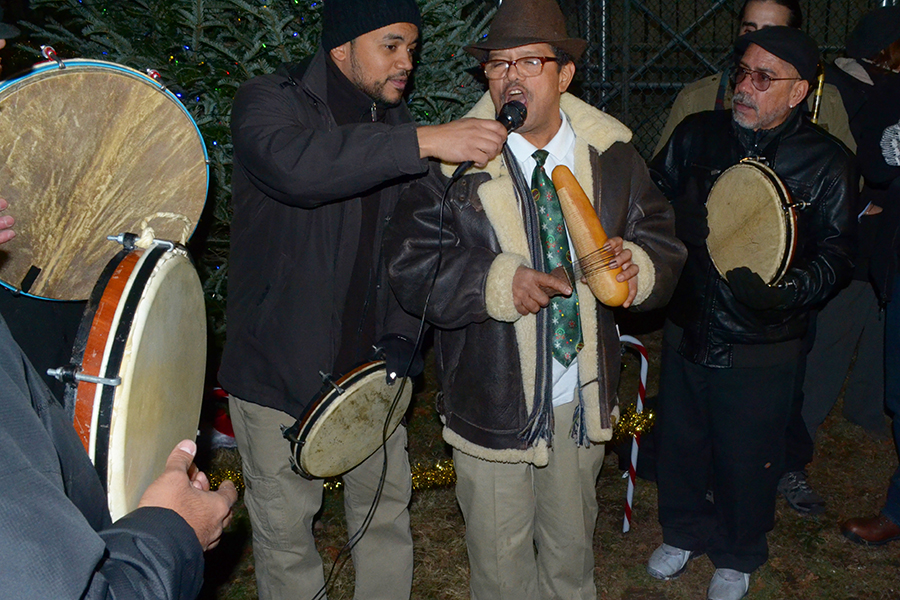 On Wednesday, December 21, 2016, WHEDco’s community development department partnered with the New York City Department of Parks and Recreation to light a Christmas tree at Railroad Park in the Bronx. The installment of decorations caught the attention of passersby as WHEDco prepared for the ceremony. Tinsels, garlands and ornaments were arranged around the park to ring in some holiday cheer on a cold wintry night. The only things missing were the gifts under the tree.

“This Christmas tree makes me feel like this community is finally being recognized,” said Willie Wright, a longtime neighborhood resident. “The tree is a gift to the community.”

This 2nd Annual Melrose Tree Lighting in Railroad Park builds on prior beautification initiatives by WHEDco and partners, including the colorful, large-scale mural in the same park, designed and installed by talented local youth and artists from our Melrose partner DreamYard, with support from NYC Parks and NYCHA Morrisania Air Rights Tenant Association.

Free hot cocoa and gingerbread muffins were provided by Cinco de Mayo Authentic Mexican Cuisine, a local restaurant that is involved in the community. Attendees huddled around the snack table to keep warm in anticipation of the tree’s illumination, but were surprised by the arrival of a full-fledged parranda group, organized by WHEDco’s Bronx Music Heritage Center and local nonprofit Nos Quedamos.

A parranda is a Puerto Rican caroling procession, deeply rooted in the island’s colorful holiday celebrations. During a parranda, groups of people go from house to house, singing Puerto Rican holiday songs and playing instruments: This one included drums, maracas and trumpets!. Instruments and voices filled the air as the crowd cheered and joined in on the action. Hot cocoa was no longer necessary, as the rich music blasting out of Railroad Park warmed the hearts of everyone in a two-block radius.

“What better way to start the holidays than with music, hot cocoa and complete strangers singing along together?” said Susana Font, a local resident who joined the celebration with her son.

After a few words from WHEDco and Nos Quedamos, the tree was finally lit.. The parranda resumed loudly after the ceremony, and then continued its procession down the casitas of Melrose.

“I’ve always missed the parranda since I moved here from Puerto Rico, and I’m glad to see the tradition is still alive,” said Elizabeth Rodriguez, a lifelong resident of the neighborhood.

The Tree Lighting at Railroad Park provides an opportunity to come together, enjoy diverse holiday traditions, and reflect on our hopes and wishes for our families and community. This event is also part of WHEDco’s efforts to revitalize neighborhoods, activate public spaces, spur economic opportunity and, overall, create more beautiful, vibrant communities that instill pride in their residents.