Thanks to everyone who joined us during our Silver Anniversary Celebration, as we honored Nancy Biberman, Founder & President Emerita, welcomed our new President, Davon Russell, and celebrated 25 WHEDco Champions who have been instrumental to our work over the past 25 years.

Special Thanks to our Event Sponsors! 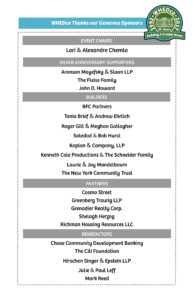