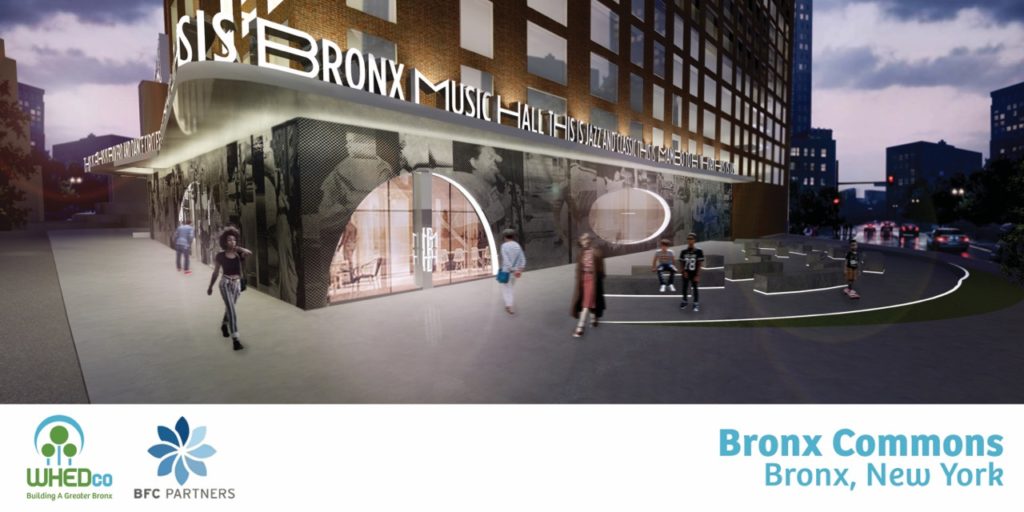 During The Richman Group and RichMAC’s first annual awards ceremony!

WHEDco and BFC Partners have been awarded the 2017 Creating a Dynamic City Award for their work on Bronx Commons, a 426,000 square foot, $165M mixed-used development in Melrose Commons that will include 305 affordable apartments, a landscaped public plaza, places to eat and shop, all anchored by the Bronx Music Hall, a new music venue, gallery, and arts-based community center.

“For more than two decades, WHEDco’s community development work has been grounded in the preservation, memory and history of the South Bronx, expressed through architecture, design, culture, education, business creation and commercial planning,” says Nancy Biberman. “We are deeply grateful to The Richman Group and RichMAC for supporting Bronx Commons –a joint venture between WHEDco and BFC Partners– and for recognizing the value this development will bring to the Bronx.”

WHEDco’s approach to community development stems from the belief that communities need much more than just housing in order to thrive. Using affordable housing as an anchor, WHEDco revitalizes communities surrounding its developments by advancing the economic empowerment of low-income women of color through their Home-Based Childcare Training Institute; providing entrepreneurs with an affordable way to grow their small businesses through their commercial kitchen; improving the educational outcomes of low-income children through early education, after-school programs, and a charter school; leading initiatives to increase access to healthy foods and reduce food insecurity; creating safer, more beautiful streets by advocating for transportation improvements and revitalizing underused spaces; and increasing access to arts and culture, building on the Bronx’s rich cultural and musical legacy to foster cultural appreciation, community engagement, and neighborhood pride.

Bronx Commons will transform the final undeveloped parcel of the Melrose Commons Urban Renewal Area into a vibrant center for living, working, learning, shopping and entertainment.

This is Richman Housing and RichMAC’s first annual awards ceremony, as it seeks to recognize the outstanding developments that either broke ground or opened in the last year. Bronx Commons is one of the selected 2017 honorees, and the award celebrates the development itself, and its significant contribution to the life of its neighborhood and our city.

The event attracted leaders from the public, the private and the nonprofit sectors.