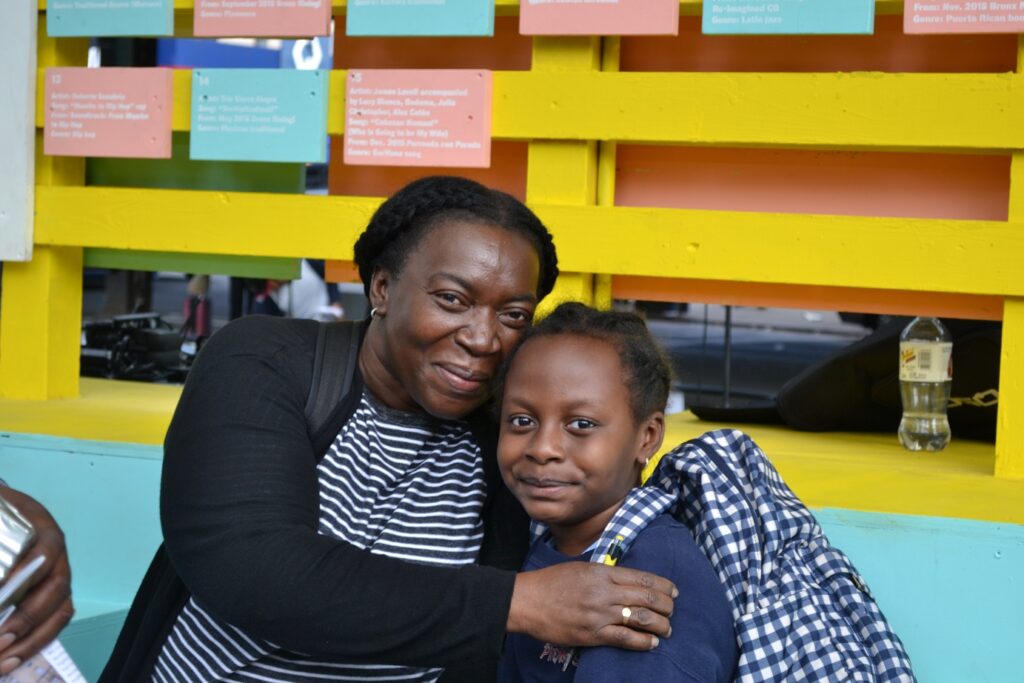 On Friday, June 14, 2019, WHEDco unveiled a colorful new public installation bringing Bronx music, solar-powered lights, seating, and community art to an underutilized space at Keltch Park on 170th Street and Jerome Avenue in the Highbridge/Concourse area of the South Bronx.

WHEDco’s new “Boogie Down (Youth) Booth” follows three previous booths, installed between 2014 and 2016 at different sites in Crotona Park East and Melrose. The Boogie Down Booths are part of WHEDco’s ongoing neighborhood revitalization efforts throughout the South Bronx, which seek to beautify neighborhoods, promote safety and better lighting, and activate public spaces to transform them into vibrant gathering spots for community members. 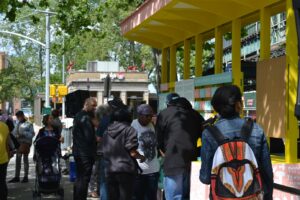 Designed by Chat Travieso, the designer behind the first three installations, this newest booth was informed by the “Yes Loitering” Project, a public space and safety youth initiative that sought to investigate how teens might be excluded from or targeted in public spaces, and developed ideas on how to create more youth-powered spaces. The research project was led by Travieso and a team of Bronx teens from the area, including WHEDco program participants Monserrat Ambrosio, Melkyn Acosta, and Natalia Baez. The group of young researchers met with community members, merchants, and other key stakeholders to gather valuable input regarding neighborhood needs.

“I’m very honored and grateful to be working with WHEDco again on another Boogie Down Booth. This fourth iteration of the Booth, which we’re calling the ‘Boogie Down (Youth) Booth,’ was designed in collaboration with young people from WHEDco’s Teen Program to create a space for and by teens that is safe and welcoming to all,” says designer Chat Travieso. “The booth includes solar-powered LED lights, seating for folks to mingle, have lunch, listen to music, or wait for the bus, directional speakers playing music by local artists that celebrates Bronx culture and masks nearby traffic noise, paintings made by local youth and community-members, and a community chalk board wall for notices on upcoming events, resources, and more.”

Like all previous booths, the Boogie Down (Youth) Booth pays tribute to the rich culture of the Bronx, as expressed through music. It incorporates solar-powered speakers that stream music continuously, featuring a playlist curated by Elena Martinez and Bobby Sanabria of WHEDco’s Bronx Music Heritage Center, showcasing the sounds of the borough, including salsa, jazz, Afro-Caribbean rhythms, hip-hop, Garifuna, and blues. Featured artists include The Diplomats with the Super Girls Group and Arlene Smith’s Chantels, Jenn Jade Ledesna, Sery Colón, Jarana Beat, KumbaCarey, and Badenya, among others.

“We cannot underestimate the role of the arts in community-building and affirming pride of place,” says Davon Russell, President of WHEDco. “Music shaped, and continues to shape, the Bronx’s story, and it is important to provide new opportunities for community members to connect with and celebrate their heritage. That is the purpose of initiatives like the Boogie Down Booth and the new Bronx Music Hall, a music performance and cultural venue dedicated to preserving and promoting the rich cultural legacy of our borough.”

The Bronx Music Hall – which will serve as the permanent home of WHEDco’s Bronx Music Heritage Center– will open in 2020 at Bronx Commons, a mixed-use affordable housing complex developed by WHEDco and BFC Partners in the Melrose section of the Bronx. 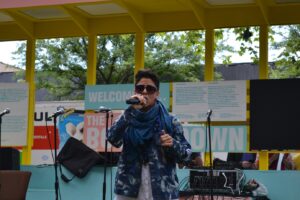 At the event, attendees received coupons to sample free treats from local restaurants, including Angiolina’s Restaurant, Tito’s Empanada’s, Miguelina Breakfast & Diner, and Emilio’s Bakery, among others. This was part of WHEDco’s ongoing efforts to promote local businesses and spur the economic vitality of the neighborhood.

The “Boogie Down (Youth) Booth” will remain at Keltch Park until May of 2020. The design concept for the original Boogie Down Booth is by Chat Travieso and Neil Donnelly for the Design Trust for Public Space.

The “Boogie Down (Youth) Booth” is funded by the NYC Department of Small Business Services (SBS) Neighborhood 360 Grant, and is part of the NYC Department of Parks & Recreation Art in the Parks Program. Special thanks to WHEDco’s Education and Youth Development Program for providing assistance during community visioning sessions for the Boogie Down (Youth) Booth, Community Board 4, Council Member Vanessa Gibson, community partners, and local business owners.